It’s been a while…

If you follow me on Instagram you will have seen that a few months ago made I a big decision regarding work and schooling which has meant a big change for us (although in reality it feels more like getting back to normal).

After two terms of school, several different reasons (and fate, I believe) caused us to decide to home educate. I never thought that this would be possible to do but a job came up in a Steiner principled daycare for 3-8 year olds and I got it! So my son attends with me three days a week which means we have a happy balance of social opportunities and time for us to do our own thing.

The Waldorf approach to education is a warm one and allows children to learn through play, placing importance on the use of natural materials. This just seems to fit well with our lifestyle and how I’m already raising my son. As well as being great for him, it is wonderful to have a job that feels so wholesome.

Recently the kindergarten took part in the Michaelmas Festival along with the school (which was set up by home educating parents and is attended by the children part-time). Participating in this celebration gave me the confirmation that I’ve been needing; we have definitely made the right decision for us. The sense of community was everything I had hoped for with apple pressing and tasty treats of apple jelly and dragon bread for sale, made by the children. The little kindergarten puppet show was so sweet and the Michaelmas performance by the older classes had a personal quality about it which made it all the more special. You could see the children were really enjoying themselves, those that were performing and those in the audience. My son loved the anticipation of waiting for the dragon to make its appearance!

Michaelmas is all about facing your fears, defeating (or taming) the dragon within. The children made their own paper dragons and were told stories of St George and the Archangel Michael. There are many versions of the story but in most St George defeats the dragon with a sword made from the spark of a shooting star sent down by Archangel Michael. 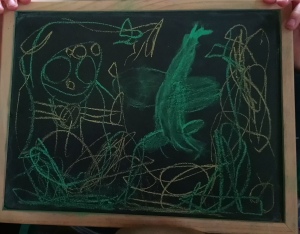 My son has been very taken with the idea of noble knights and at home we made a shooting star crown out of hazel and wrote key words on autumn leaves from the poem he and his friends had been reciting:

Brave and True will I be

Each Good deed sets me Free

Each Kind word makes me Strong

I will fight for the Right

I will conquer the wrong

He enjoyed galloping about on the moors with his sword and shielding himself from the wind, feeling energised by the forces of nature!

At home my son learnt about Draco the Dragon through retellings of the Greek myth and finding out about the constellation in our night sky book. He made his own out of stones. 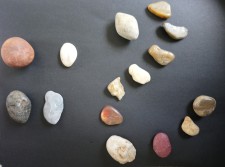 On learning that Draco lies to the north, he wanted to know how you can tell which direction that is. This led to him making his own compass by magnetising a needle and placing it on a leaf floating in a bowl of water. It worked! (Until the wind blew…)

Bedtimes have been about one of our favourite books: Star Climbing. It is a sweet story with poetic lines and beautiful illustrations about a little boy whose quilt becomes the night sky, incorporating the constellations as he eventually falls asleep snuggled in the feathers of Cygnus the swan.

We made a shooting star bean bag in preparation for the Draconid shooting stars that can be seen at the beginning of October (but sadly not for us as there was too much cloud! We did witness some spectacular ones in the summer though). I cut out two circles of felt and my son did the rest while I held it for him -I was very impressed with his blanket stitch. We have been using the bean bag to throw to each other whilst making up rhymes about shooting stars.

Inspired by the dragon of the Michaelmas Festival, we made our own dragon puppet. I cut a length of elder and my son helped me to cut it into ‘beads’ with the secateurs. He then hollowed out the middles of each bead with a tent peg. Elder is great for young children to use as the middles are so soft and can be made into bracelets etc (it is toxic if eaten I believe so do your research before using, especially with little ones who are still mouthing things). He threaded the beads onto red wool to make the body of the dragon and there happened to be a lovely mossy piece for its head with nobbles that looked like eyes! A beech nut case with a hole hand-drilled through the middle made for some great flames and we glued on two pressed leaves that were sent from his cousin for its wings. Finally my son went to the garden to find a stick and we tied each end of the wool to it. Have a look on Instagram to see his dragon fly! 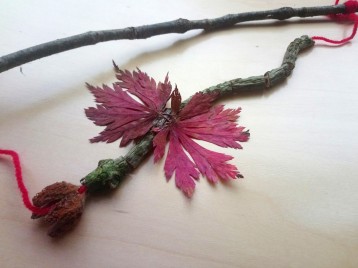 The Orionids meteor shower is happening throughout October and is meant to peak this weekend. It’s stormy and cloudy again here so we won’t be able to see any meteors but I think it’s still pretty amazing to know that they are shooting through the sky above us as we’re cosied up inside in our little home, a tiny spec in the universe.

2 thoughts on “Dragons and Shooting Stars”

Dance in the Rain!